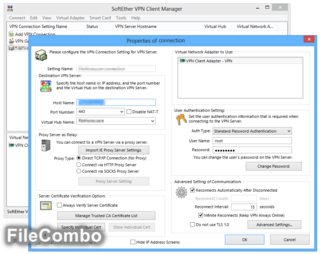 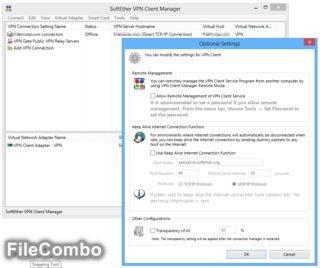 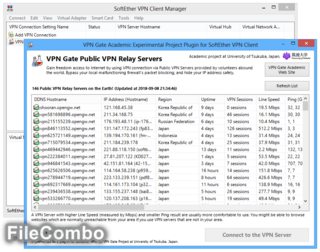 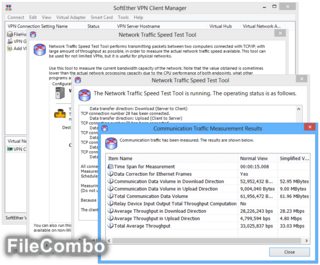 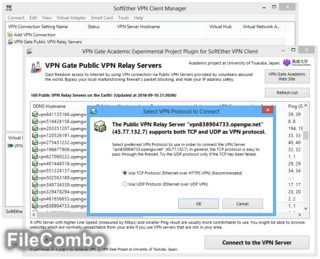 Simply install VPN Gate Client Plugin to SoftEther VPN Client. It will enable you to connect to any of Public VPN Relay Servers of VPN Gate in a snap. It has a better throughput than L2TP, OpenVPN, or SSTP. These program files are digitally signed by a certificate issued by GlobalSign. The binary file has a countersignature issued by Symantec. Download and Install SoftEther VPN Gate Client Plugin Now!

You can take these advantages by using VPN Gate: You can get through the government's firewall to browse restricted web sites (e.g. YouTube). You can disguise your IP address to hide your identity while surfing the Internet. You can protect yourself by utilizing its strong encryption while using public Wi-Fi. Unlike traditional VPN services, VPN Gate can get through most firewalls. VPN Gate is free of charge. Not a single registration is required.

SoftEther VPN ("SoftEther" means "Software Ethernet") is one of the world's most powerful and easy-to-use multi-protocol VPN software. It runs on Windows, Linux, Mac, FreeBSD, and Solaris. The tool is not only an alternative VPN server to existing VPN products (OpenVPN, IPsec, and MS-SSTP). The VPN has also original strong SSL-VPN protocol to penetrate any kind of firewall. Ultra-optimized SSL-VPN Protocol of the VPN has very fast throughput, low latency, and firewall resistance.

The app VPN has strong compatibility with today's most popular VPN products in the world. It has the interoperability with OpenVPN, L2TP, IPsec, EtherIP, L2TPv3, Cisco VPN Routers, and MS-SSTP VPN Clients. The VPN is the world's only VPN software that supports SSL-VPN, OpenVPN, L2TP, EtherIP, L2TPv3, and IPsec, as a single VPN software. Install SoftEther VPN Client with VPN Gate Client Plug-in (only once for the first time). Run VPN Gate Client Plug-in and connect to VPN Gate Server. Enjoy the Internet via VPN relaying!

How does VPN Gate work?

VPN can hide your actual IP address
While your connection is relayed through a VPN server, the source IP address disclosed to the target server will be the VPN server's, not your actual one. This will be very helpful to you because nobody can trace back to your original IP address, eliminating the risk of being spied on. VPN enables you to post content on BBS or send emails completely anonymously, providing safety to just activists who intend to bring an accusation for public benefits. You will be safe from revenge or lawsuits by the accusee. Finally, even if your computer has been compromised by malware and hijacked by a criminal, VPN protects you from being framed up and thrown to jail because your actual IP address will be concealed.

VPN can prevent eavesdropping
When using a VPN, all transmissions will be automatically encrypted. Even if your local network is compromised by snoopers, your transmissions will remain intact. Note that this solution can only encrypt within the VPN tunnel, therefore packets forwarded from the VPN server to the destination are not within the scope of this solution. (i.e. it will not be encrypted.)